Max 6 is software for computers to allow the creation of almost mind-map looking circuits. You have a range of tools at your disposal to be able to create a function. This could be a blinking light or virtual keyboard programmed to play a tune. The great thing about the software is you can attached devices to the computer to input or output information. So for example, you can attach a MIDI keyboard to record music or a webcam to manipulate the video it captures.

Our brief was to capture some form of information and represent it differently using the Max 6 software.

The software has a range of already installed examples (represented as help files) to load up and try-out. Myself and a class mate (Stephen Dunn) decided to start with a music player and add the functionality of mixing individual tracks to it. The volume of one of the two music tracks had to be inverted to allow for the mixing effect to work. Methods in Max 6 are mostly calculated using maths. So we had to figure a mathematical way of inverting the volume data supplied by one track. Answer: We had to take 10 (being the max unit of volume) and then multiply the data by negative 1, to make it a positive value again. It took us so long to figure it out! 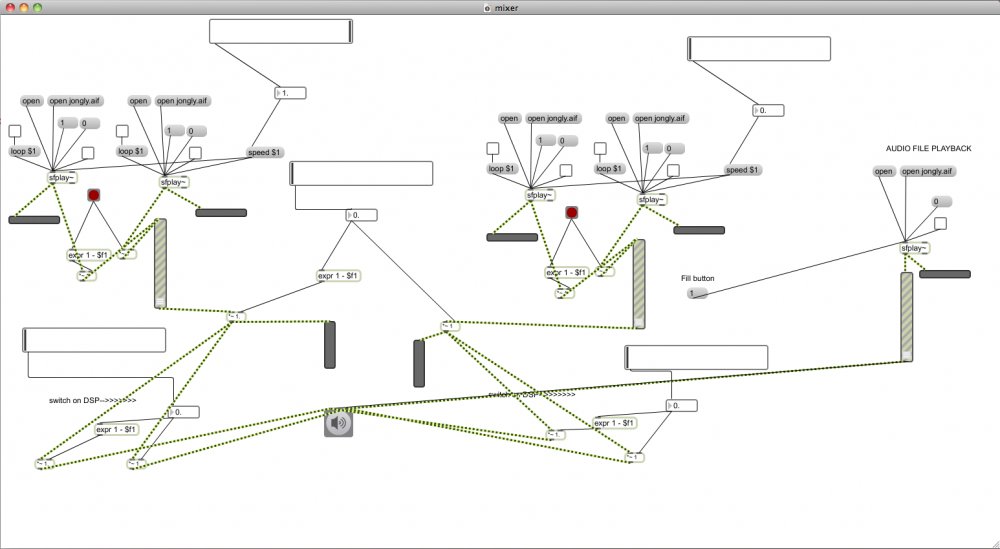 We managed to create the mixer; you could swap tracks and click a virtual button for a fill sound. We hoped to attach an Arduino board to the computer with a couple physical volume dials on it, which would interact with the software. But we could not find a working plugin that would pair up the Arduino board with the software, to allow communication. So this could be the improvement for the future. Also, during the demonstrations of project work, one person had used an Xbox 360 controller to manipulate the music generator they had created. It suddenly clicked then that we could have rigged up a Playstation 3 controller to our setup.